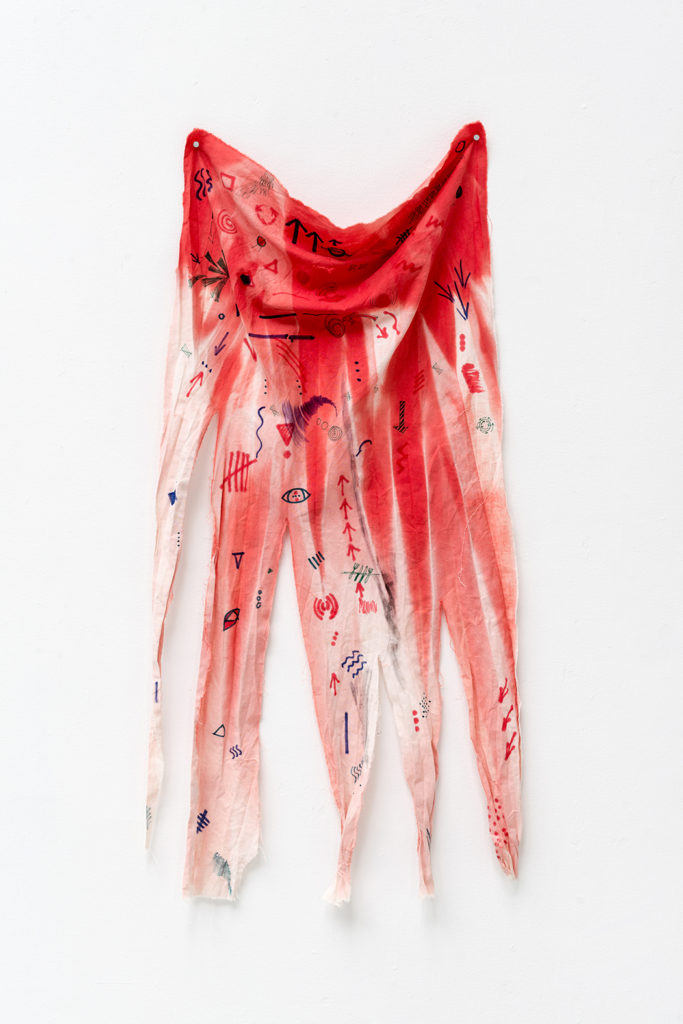 Woop Woop, 2016, Size 900 x 420 mm, Textile fallen from a window in Stockholm where it was a protest against the demolition of Slussen, drawing with whiteboard marker pens 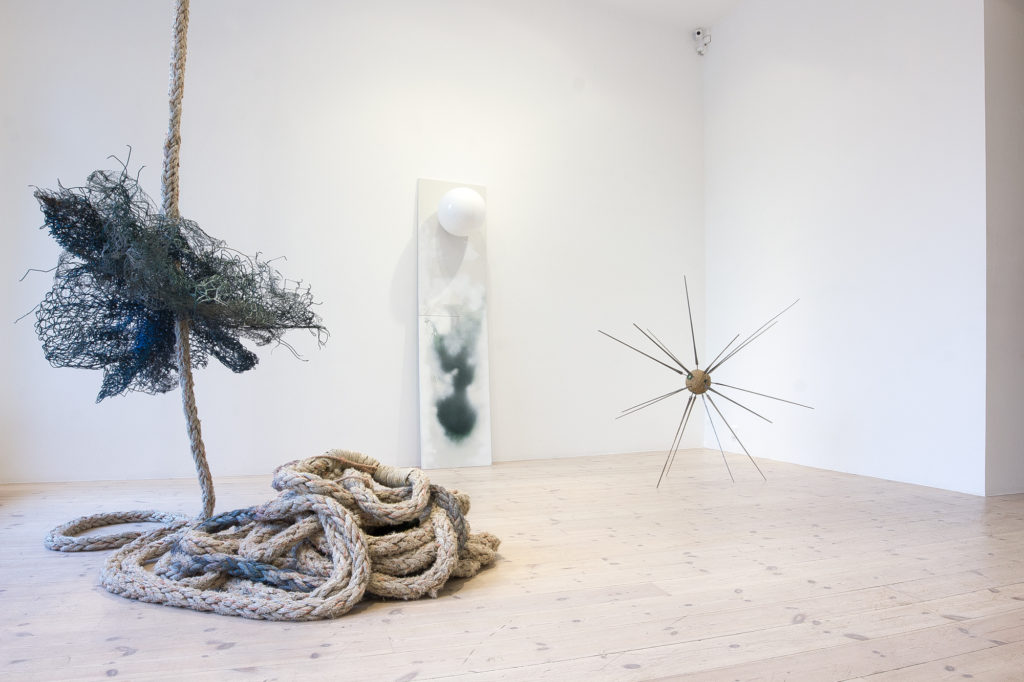 Throughout the twentieth century, museums were, for artists and philosophers, the cemeteries of art. The political grounds for this, says Boris Groys, lay in the strategy of the French Revolution to replace the usual destruction of the tyrant’s monuments with their defunctionalisation in a museum. What once was living culture became dead art. Nowadays museums no longer appear in this way. They are event sites where contemporary art lives and thrives with the aid of the market. According to Groys this implies that today’s art sees the contemporary as passé. All successful art would therefore have a post-revolutionary attitude, and, one may wonder, therefore be a pacifist fellow traveller?

In Johanna Gustafsson Fürst’s exhibition a strange will to kill is given expression. Not because she would want to have museums back, but in order to put our time behind her with the help of art. Since the PR-society and barista-mentality grow and take over, one cannot be post-revolutionary; one must kill the very fundaments of this type of society and mentality through art. The debate is already won but it does not suffice for something to change. It is sensibility that must change. And then one must show that it has died, preferably at a museum, for the public sphere is no spectacle but a continuous regulation of sensibility. What we need is a monument to our time’s governing and suddenly deceased concepts, to put them lying in state. This is what we see in the exhibition.

The concepts to be embalmed work here as titles: transparency, win-win, distribution, woop woop, troll face, and so on. Take the work Autoimmunitet, a solid and heavy wooden sphere with rapier blades radiating out in every direction. The name denotes a dysfunction in the immune system that makes it turn its weapons against the body that it should protect: A self-harm of the tissues; a cellular self-hatred. The wood in the work comes from a public park bench that someone had vandalised. Now, the bench looks like a grotesque dream of a hostile-design brain, which actually determines the way our public spaces look. Social autoimmunity was moulded there. If one gets closer the material gives other sensations. It has the familiar smell of park bench and oak, the smell of public places, at least for me who grew up in a park. One wants to swipe one’s finger over the blades, recall images of leisure, the steel industry, elegant violence and sport as shackled competition. It is a work that wants to overcome visual distance to hit the body; that “effect and instrument of visualizing technologies”, as Karen Barad writes. It wants to direct its spikes, its weight, its splinters, towards eyes and fingers; it wants to be a work for the nose and its memory-images and visions. Every piece in the exhibition demands that the distance of the visual be more or less abolished, so as to affect all the more powerfully the instrument of visualizing technologies. For it is there that the hateful concepts will be made dysfunctional; it is there that they will be embalmed. It is a work of technological precision that requires violent power. The work directs people away from themselves, towards the things that mummify concepts. Trollets ansikte has a beautiful, mirror-like surface that attracts one, all the closer since the reflections are hard to distinguish. Finally, face-to-face with the object, one does not receive one’s own image back but only a hint of it in the frame. There you are, facing a thermal blanket that really is not your reflection. The belief in the persuasive power of objects and materiality is strong here.

This is political art in a time when we cannot be so sure of what politics actually is. It is a political art that wonders what paths can be found in a time of “neodemocracy”, where lobbyism has knocked out all other influences. Maybe then, there is only art left to place our hopes in? For what else could affect our sensibility or our faculty of reception of the concepts by which we let ourselves be governed?  Political art is critical, that is, it works with our receptivity, with our sense of what is acceptable. By which political means and concepts do we accept to be governed as citizens today? And which are unacceptable? The answers shift with sensibility.